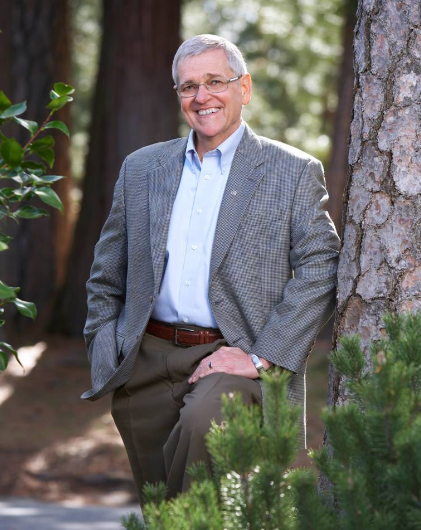 Ed Scofield was born in Grass Valley, California at the old Grass Valley Hospital that is now a parking lot on South Auburn Street. He graduated from Nevada Union High School in 1962 and from Sierra College in 1965.

Ed has always been active in Nevada County community organizations and was previously president of:

Ed was elected to the Grass Valley City Council in 1975 and served until 1982 in that capacity. He is currently President of the Rotary Club of Grass Valley South.

In November of 1982, Ed was appointed as the Secretary / Manager of the 17th District Agricultural Association; better known as the Nevada County Fair. He served as the Fairgrounds CEO until his retirement in 2008. During his tenure with the Fair, he was active with the Western Fairs Association where he served as President in 1996, and was inducted into the Western Fairs Hall of Fame in 2004. Ed continues his dedication to the fairgrounds by serving as a member of the Nevada County Fairgrounds Foundation, Inc. The Foundation is a 501 (c)(3) with a mission of fund raising for improvements to the fairgrounds, especially in those areas serving the youth of Nevada County.

Ed also serves on the Board of Directors of Sierra Nevada Children's Services and was recently elected to the Vestry of the Emmanuel Episcopal Church.

Ed has been married to Carol for 30 years. They have three children, Wendy, Ed (the 4th) and Nicole; in addition to Brandyn, who joined the family as a "Little Brother" in 1994. They have six grandchildren and one great grandchild.

Ed enjoys hiking the trails of Nevada County, occasionally slips on his old running shoes, and still enjoys a day of downhill skiing. He always has a good book to fill in leisure time.